Photos of a woman riding a bluefin tuna that were posted to an Instagram account of a competitive angler are concerning, say marine scientists in Halifax.

The photos, revealed by a CBC News investigation Tuesday, show what appears to be 30-year-old Stephanie Choate of Miami Beach, Fla., sitting in a wetsuit on a tuna, while holding a bottle of wine above her head. These were posted to her Instagram account.

“It’s hard to explain the love I have for these fish,” the caption read. “They live in my heart.” 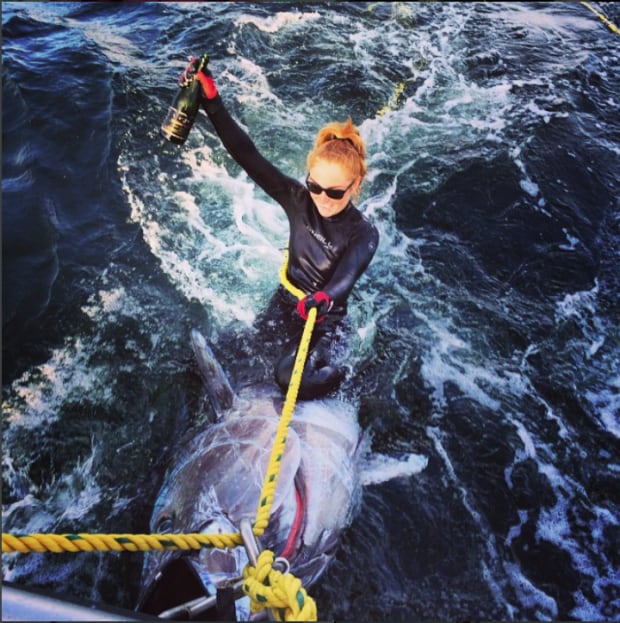 The wealthy woman is an internationally recognized angler who came to Nova Scotia to hunt the fish. Choate sits on the board of a U.S.-based conservation group.

“She was showing behaviour that didn’t seem consistent with conservation,” said Katie Schleit of the Ecology Action Centre’s marine team.

While Choate has not been charged, her crew from Ballantynes Cove, N.S., has been. The charges relate to alleged incidents that occurred during her trip, as well as a later sting by the Department of Fisheries and Oceans. 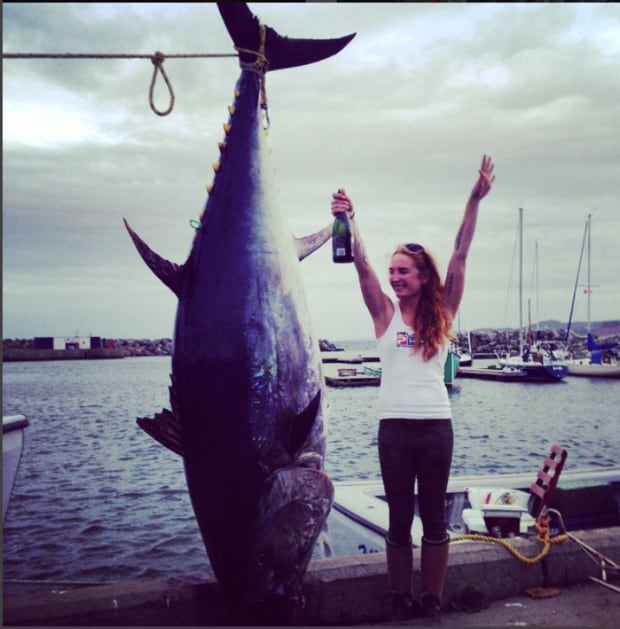 Fisheries officers are alleging the woman who appears to be Choate and the crew took part in a practice known as “high-grading.” It involves catching a tuna, but waiting to tag it in the hopes of catching a larger one.

George William Boyle, the commercial licence holder who DFO alleges was on the boat with Choate, is accused of failing to tag a bluefin tuna immediately after the fish is caught and recording all fishing activities in a log.

“If these allegations are true, these rules weren’t followed, and these regulations are set to make sure that we’re not catching more tuna or having more of an impact on the population than is recommended,” Schleit said.

Bluefin tuna is especially vulnerable in the western Atlantic, including in the waters around Nova Scotia. The population of bluefin tuna is less than half of what it was 45 years ago, when it was already low, Schleit said.

Tuna is not only valued on the market, but internationally catching the large fish for sport is a money-maker.

“Tuna Riding,” another of Choate’s Instagram photos was captioned. “Harvested this beautiful creature and I wanted to get close and appreciate it.”

Anglers and other hunters do care about the animals, in the sense of maintaining populations for the future, says Boris Worm, a marine biologist at Halifax’s Dalhousie University.

“It gets tricky when it concerns” animals such as lions, tigers, cheetahs or “bluefin tuna in our waters,” Worm said.

Catch-and-release for sport should be done “very, very carefully” so as not to hurt the fish, he said. These images are reminiscent of thedentist who killed Cecil the Lion in Zimbabwe, Worm said.

“I think what we have to do is pay attention to this and find out who’s doing the right thing and who’s doing the wrong thing — and to do this in the name of conservation, to me that’s pretty sickening.”