Nothing motivates us to get out on the water like big fish, and these are some of the biggest of 2015.

There’s been plenty of great fish in 2015, but not a lot made our lower jaws hit the floor quite like these. In this list, we’re reviewing the 20 fish this year that blew us away. It goes without saying that many of these fish are records, both of the state and world variety, and absolutely made us want to skip work and go fishing.

It’s been a busy year and we couldn’t fit everything into one list, but is there a fish you think deserves a spot on here? Let us know in the comments below. 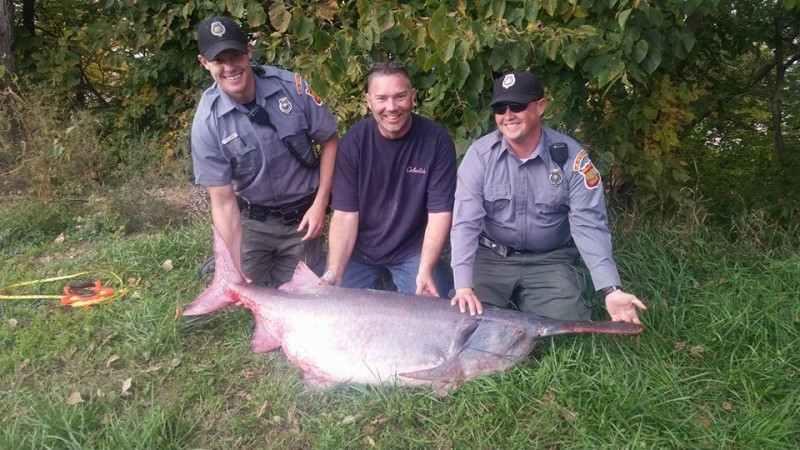 Tom Keller (center) poses with his new state record paddlefish, which was confirmed to be the largest fish caught in Nebraska history. Image from Facebook.

In October, the Nebraska Game and Parks Commission announced that this massive paddlefish is now the largest fish ever caught in the history of the state. The lucky angler is Tom Keller, who landed this beast from the Missouri River in October. Can you guess how much it weighed? On September 19, Mathew McConkey caught this massive fish with a four-inch goldfish on a trotline in the Missouri River. The Missouri Department of Conservation didn’t have to wait long before announcing it as a new state record for the “alternative” method.

“Once I grabbed the line I knew right away that I had big one,” McConkey said. “The giant moved my 17-foot Lowe boat around like it was nothing.” What fish can break a record that’s already lasted more than a century? This one. Image courtesy Michigan Department of Natural Resources.

Records are meant to be broken, but breaking a 100-year-old record is not something to be taken lightly. Greg Gasiciel hooked this 9.33-pound, 24.5-inch smallmouth bass from Hubbard Lake in October, dethroning a record from 1906 that was once thought to be unbeatable. That’s no catfish; it’s a bass. Richard Knisley caught this 18.32-pound hybrid striped bass while fishing in Deer Creek Lake back in June. Needless to say, it shattered the state record. A high school student from Kingston, Tennessee may have caught the largest flathead catfish in state history, but the teen angler ultimately decided to release the fish back into the water instead of pursuing the record. Troy Powers caught this behemoth of a catfish at Watts Bar Lake in July.

You can read more here. Tim Little holding up his massive spotted bass for the camera. Image courtesy California Department of Fish and Wildlife.

The California Department of Fish and Wildlife (DFW) announced earlier this year that the state had a new record spotted bass, caught in a Yuba County in January. Timothy Little reeled in this massive 10.38-pound spotted bass from New Bullards Bar Reservoir, which is commonly recognized as one of the top fisheries in the country for that species. The angler may not have expected the record-breaking catch, but officials said he was certainly prepared for one.

“Luckily Tim was ready that day for this rare opportunity, as he had a certified scale on his boat and a witness!” the DFW wrote on Facebook. “After reviewing Tim’s record application, DFW confirmed that Little’s fish beat the 14 year old previous record of 10.25lbs taken from Pine Flat Lake (Fresno County) by Brian Shishido in 2001.” On April 4, Paul Glover of Sallisaw reeled in this large rainbow trout from the Lower Illinois River below Tenkiller Ferry Dam. The fish was certified at a weight of 11 pounds and 4.32 ounces, beating out the previous state record of 10 pounds, 10.56 ounces set by Mark Reed in 2013. The new record also measured 29 3/16 inches in length and 16 9/16 inches in girth. This 81.4-pound monster of a flathead catfish was caught by James Klauzer from Sangchris Lake in August. Who says Asian carp aren’t good for anything? With a piece of cut Asian carp as bait, Missouri angler Burr Edde III pulled in a 120-pound, eight-ounce blue catfish on a trotline, smashing the state “alternative method” record. According to the Missouri Department of Conservation (MDC), the fish was caught on a stretch of the Missouri River in Saline County back in March. Back in October, the International Game Fish Association (IGFA) certified a 28-pound, eight-ounce flathead catfish caught by five-year-old Luke Harvell as the new record for that species in the 50-pound line class. The young angler caught the fish in North Carolina’s High Rock Lake on July 19 while fishing with his dad. The two had been fishing specifically to break the record after Harvell’s father, Ricky Harvell, noticed that the previous IGFA record for flathead in that line class was only about 16 pounds.

Read more about this catch here. In April, an Oklahoma angler crushed the record for the largest fish ever caught in the state with an alligator gar that weighed a staggering 254 pounds. Paul Easley of Mead snagged the beast of a fish in Lake Texoma and was able to have the fish certified by a state wildlife biologist before releasing the eight-foot gar back into the water. In May, Bill Stewart of Weeki Wachee landed a 69-pound, eight-ounce blue catfish from the Choctoawhatchee River. According to Walton Outdoors, the catch came as part of the third annual Choctawhatchee Catfish Roundup tournament in Caryville. To absolutely nobody’s surprise, Stewart’s behemoth catfish stole the show and easily crushed the competition—beating the runner-up by more than 40 pounds.

You can read more here. Robert Hawkins caught this beauty in under a minute. Image from Facebook.

A fly fisherman in Minnesota may have landed a new world record for muskie. Robert Hawkins of Lake Elmo announced last month that he landed a 57-inch muskellunge from Lake Mille Lacs, the first time he had been to that particular lake.

The monster fish was estimated to weigh around 50 pounds, and is a strong contender for the International Game Fish Association’s (IGFA) world record for length. Length records are generally recognized by IGFA for fish that have been released alive. Andy Belobraydic caught this monster on a one-inch unbaited hook. Image from Facebook.

Missouri’s list of state record fish now has a new heavyweight, and it belongs to Andy Belobraydic of Richwoods. In March, Belobraydic landed a 140-pound, 8.8-ounce paddlefish at the Bridgeport Resort on Cape Fair. Arkansas wildlife officials announced in March that the state’s paddlefish record has been shattered by a 105-pound fish that came out of Beaver Lake. The prehistoric-looking fish was caught by Jesse Wilkes of Springdale on a 30-pound-test line when he and his fishing buddy, Richard Wynne, were trolling for some eating-sized walleye. Unexpectedly, Wilkes snagged the massive paddlefish on its side. Since paddlefish are filter-feeders, snagging is the most common method of capture in Arkansas. In February the Tennessee Wildlife Resource Agency officially recognized Gabe Keen’s 15.2-pound largemouth bass as the new state record. The massive fish shattered a record set by a 14-pound, eight-ounce fish caught by James Barnett all the way back in 1954. Keen, a high school teacher who also coaches bass fishing in his spare time, said that he never expected to nab a state record during what he thought was simply practice. Lawrence Dillman of Rockaway Beach, Missouri caught a striped bass so big, he had to literally tackle the fish to bring it out of the water. According to the Missouri Department of Conservation (MDC), Dillman caught the massive 65-pound, two-ounce fish from Bull Shoals Lake on May 21. Laid out, the fish measured nearly 50 inches long and 36 inches around.

You can read more about this story here.

19. Maryland record snakehead, or is it? The last two entries on this list belong to a pair of snakeheads only a fraction of an ounce apart. Of course, only one can retain the current record. Todd Murphy caught a 17.47-pound northern snakehead while bowfishing in Mattwoman Creek on August 8, but eventually lost it to the last fish on our list.

Read more about it here. On October 16, bowfisherman Michael Meade of Upper Marlboro managed to arrow a 17.49-pound snakehead from the marshes of Mattawoman Creek, beating Murphy’s record by just 0.02 pounds.

That’s as close as they come.

Read more about it here.