The fish were biting like mad on Molson Lake over the weekend, and one Manitoba couple caught the feeding frenzy unfolding right beneath their feet.

Diane Anderson and her boyfriend Pierre Wilson are from Norway House, Man. They ventured out on the ice of Molson Lake for a day of fishing Saturday.

It was windy and snowing out on the ice, but Anderson and Wilson stayed warm inside their pop-up ice-fishing shack. The ice was covered with only a very thin layer of snow, which melted down inside the enclosure revealing 60-centimetre-thick, crystal clear ice.

The ice was so clear Anderson said they could see their lures dangling four metres below their feet.

“At one point there was a fish that had swum just about a foot underneath the ice,” she said. “Then I jigged my hook … and you could see it biting.”

Anderson has been ice fishing on the lake for years. She can’t recall the last time the ice was see-through.

Apart from the beautiful quality of the ice, Anderson said fishing was hot, too. Between the two of them, Anderson said they were reeling in a new lake trout every 15 minutes.

Molson Lake is one of the pair’s favourite fishing holes, as it regularly produces nice sized lake trout and walleye throughout the year. It isn’t entirely easy to access, however, as is evidenced by how few people fish the lake in the winter, Anderson said.

Anglers have to first drive down a gravel road and then hop on a snowmobile or walk down a frozen creek to get to the ice. It’s a bit of a trek but the fishing is too good to pass up, Anderson said.

“We’ve tried different spots, but they don’t bite as much,” she said. 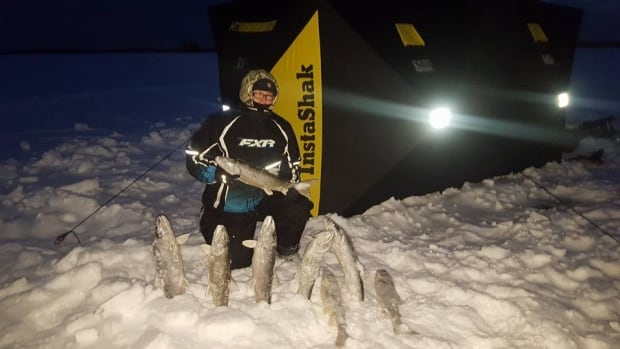 “Molson Lake always has good fishing. It’s a beautiful spot. Winter or summer, fall, spring; we try to get out there as much as we can and always make it a point to take anybody we can out.”

The lake trout Wilson reeled in while Anderson filmed measured in at about 74 centimetres.

Molson Lake is about 60 kilometres northeast of Norway House and about 485 kilometres from Winnipeg.