Owners of ice fishing shacks on the Kennebecasis River have new regulations to follow this winter, as the town of Rothesay has moved to strengthen enforcement.

They will have to put their names, phone numbers and addresses on them, and the shacks will have to be on sleds so they can be pulled off the ice by the end of March. 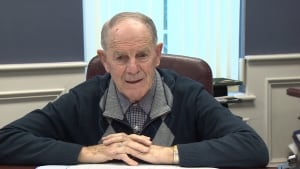 “Unfortunately, last year we had a situation where a lot of debris was left on the ice,” said Bishop.

“That’s one of our prime swimming areas in the town, so we had to bring in divers to ensure the area was free of debris.”

Bishop says owners who don’t follow the rules could face fines of more than six-hundred dollars.

Last season, there were over 100 shacks on the Kennebecasis River, and due to unusually severe weather, many were frozen in.

That made them difficult to remove, and many were just left to fall apart or fall in the water. 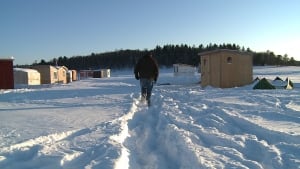 Bishop said he encourages ice fishing, but cleaning up the mess is a matter of safety.

“It’s sort of a unique thing in the town of Rothesay,” said the mayor. “We encourage that. But on the other hand, we have summer swimming programs that we want to ensure there’s a safety factor there as well.”

Two public safety officers will be in the area enforcing the new rules.

That’s welcome news for Kennebecasis Park resident Francine Quinn-Steeves, who saw debris floating by her property after the thaw in April.

“We were totally disgusted when we saw these shacks floating by because, these are our waterways,” said Quinn-Steeves. “We have to protect them. And we do play in them.”

Ice fishing will start as soon as conditions allow.