Warmer waters are helping the discarded pets breed and multiply

Have you ever dumped your goldfish in Hamilton Harbour? Here’s the bad news: it’s been breeding.

Researchers at the Royal Botanical Gardens (RBG) have counted as many as two million large and small goldfish this year, fish that are likely descendants of people dropping unwanted pets in the water.

Now there are so many that they’re throwing another wrench into attempts to rehabilitate the bay.

This year, the RBG team has counted as many as 2,500 large goldfish and two million young, said Tys Theysmeyer, head of natural lands with the Royal Botanical Gardens (RBG). They seem to be thriving thanks to climate change, and poor water conditions that have discouraged native species from flourishing. 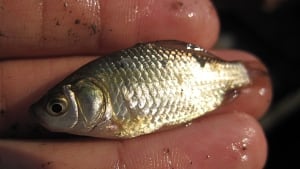 RBG spotted handfuls of them dating back to the 1990s, Theysmeyer said. But lately, the problem has worsened.

“People used to actively release goldfish into the bay a lot,” he said. “In the last five years, their numbers have been rising and rising.”

The growing goldfish population isn’t limited to Hamilton. The province says they’ve been a problem in other areas of the lower Great Lakes, in particular the north shore of Lake Erie.

In Hamilton, the numbers are rising from a perfect storm of water conditions. Warmer water temperatures mean that new fish species such as the goldfish can survive, where decades ago it might not have. Theysmeyer says pressures on water quality in the bay, such as contaminated overflow from the city, have also caused a decline in native fish species, leaving more room for goldfish.

Native fish such as northern pike, freshwater drum and several sunfish and minnow species are in short supply, Theysmeyer said. He estimates that only two species — namely yellow perch and blue gill — are showing up in greater numbers.

“A couple of native fish have been on the rise,” he said. “But goldfish win.” 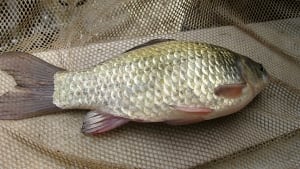 This year in particular, RBG has seen large schools of goldfish in the area. The RBG and Hamilton Conservation Authority tried to collect some, and “we collected thousands,” said Jennifer Bowman, an RBG aquatic ecologist.

RBG has contacted the Department of Fisheries and Oceans and Ministry of Natural Resources, Bowman said, about “how they would want to move forward and if they want to take action.”

The presence of goldfish throws the ecosystem off balance, Bowman said. “Goldfish are not balanced.”

“All of Hamilton Harbour is turning into a dirty goldfish bowl.”

Carp are a larger problem facing the harbour, and one the RBG and other organizations have tried to tackle for years. Carp are bigger than goldfish, so big that their feeding and spawning actions can uproot and crush aquatic plants.

They’re also bottom feeders, which means they forage in the soft sediments of a rivermouth marsh environment, the RBG says. And while RBG has built an extensive barrier to keep carp out of its marsh, the species is still an issue in the harbour.

But goldfish are increasingly prevalent. Theysmeyer said their presence is a good example of how humans shouldn’t mess with an ecosystem. “If you let your pets go, strange things can happen in the wild.”

The future looks brighter for native fish species. The city is spending millions in improvements to the Woodward Avenue Wastewater Treatment Plant, cited as one of the major impediments to water quality. The feds have also started cleaning up Randle Reef, a large underwater mass of toxic material in the bay.

Theysmeyer hopes those actions will improve native fish numbers and the goldfish won’t be quite so dominant.

But “until that happens, goldfish will be king.”